You are here: Home » Alternative Education, My Ideas

In a word, MOBILITY.  Every state that has encountered 4th generation warfare has not been able to defeat it. We must now and evermore be 4th generation warfare against the education of darkness. If we’re going to counteract the establishments of Satan, we will need attentiveness and agility. The people who claim to be alt right, or dissident right (my preference) must have enough introspection to realize much of what passes for maintaining political awareness is entertainment. What’s the latest possible take on a current event? Who just got Arkancided? I’ve seen great ideas come and go, but since it involves more than click and read, they fall flat.

Some ideas involve real world activity, but not all. We have to be careful about glory. A big tactic of the swamp is glory mongering. Put on this uniform, do our bidding, and you’ll get glory. Have reminiscent feelings about a flag, and we’ll give you glory for being in that best place, while we plunder you blind and turn your children into freaks. For church people, it’s the glory of the wonderful new building. Those who contributed so much will be hesitant to resist the wicked changes brought into the building. For atheists, it’s the glory of being smarter than those archaic religious retards.

We must abandon the glory of e-celebs, and big institutions. E-celebrities are invaluable in their own way, but we need a work around that takes their information and spreads it around by smaller accounts. Big glorious institutions are too vulnerable. Our churches need a regular re-evaluation that ruthlessly addresses infiltration. Our universities need non tenured professors who teach courses online, or however mobility keeps us from being static targets.

The above ideas are somewhat vague, but I think they have merit. There is one area that I have put more thought, that is public education, or specifically, how to counteract it. Lincoln created a monster. Now, any state that wants to ban abortion or teach creation realizes they are in occupied territory. So let’s be like the U.S. military in the Pacific Theater of WW2. Island hopping, in two ways. First, we don’t need to take on every single subject. They might do a mediocre job of teaching math, reading, or grammar, but those aren’t the two critical ones.

For years, Christians have tried to get Bibles and creation science into public schools, with little success. We’ve built private schools to do the entire job. But think about the size of the task, and how much it hinders the cause. You need land, buildings, and teachers. Satan doesn’t give a damn if your kids know reading and grammar; he wants the choke hold on science and history. Darwin’s nonsense doesn’t stand a chance outside a controlled environment.

What I propose is to have alternate classrooms; maybe mobile, maybe static. It’s already being done by ORNL, here’s picture I took of one of the trailers: 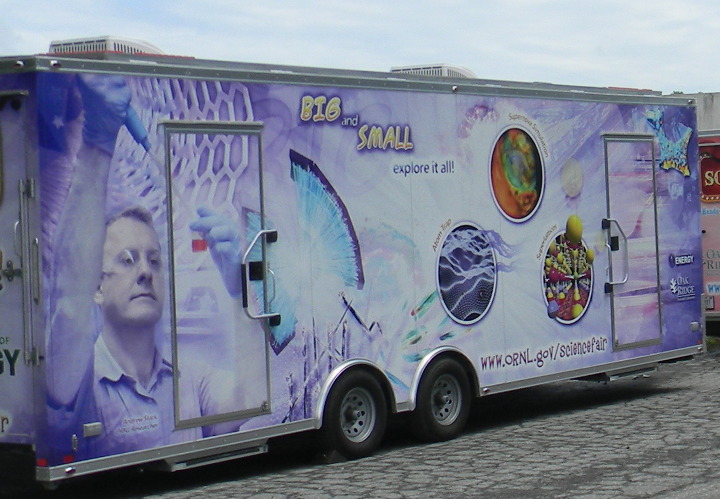 We could get churches to donate a room. We then deck it out, way cooler than a public school class. We have more than enough talent to do that. It’s free admission, open after school and on weekends. A fun place to go. We use this society’s addiction to entertainment for the cause of good. History abounds with interesting facts kids aren’t being told, and Darwin’s idea is a sitting duck.

Update 10/19/2020: A recent idea I’m looking forward to is that included in the fall festival, or harvest days historic demonstrations; you have a brush arbor. For decades in the 19th century, much of America relied on traveling circuit preachers to have services. They sometimes made a covering for shade from poles, branches, and leaves. That’s what a brush arbor is. You would have short, concise meetings, so that more people could experience the setting and hear the word.