You are here: Home » IRL > In Real Life activism

For years I’ve made signs about current events, and a lot of people have seen them. Now though, I’m working with a theme, a specific target, that being to discredit the mainstream media. To show people who watch it that they are being lied to. Working with this theme has shown me that current events can be a distraction. For instance election fraud, voting integrity, and the idea that “You can’t vote your way out of this” all seem to have a bearing on whether news is important.

Those things do get a fair amount of my attention, but the goal is not to have more informed voters. The goal is to bring down the leftist news, which is a pillar of the deep State. Bear in mind too that we are already at war. They are using:

I was glad to hear about Q and what the plan was. Common sense leaves one with serious doubts about the validity of that plan, although I do see a possibility of it playing out. Regardless, it never was my ultimate goal. If it comes to pass, it merely means we get a White Hat version of Lincoln’s Monster, instead of a Black Hat version. The ultimate goal for me is government at a state level, or smaller. So no matter what happens, we need informed neighbors to understand how much overreach has been happening. The information warfare is a pillar that supports the other forms of warfare above.

There are those who say that effective resistance must be organized. Groups they say. I haven’t looked into the history of it, but even if it was true before, is it true now? Technology has changed so many things. Here’s an article talking about leaderless resistance. It’s a bit redundant, but worth reading. In it the author talks about colonial American secret cell groups called the Committees of Correspondence. The cells didn’t have a common source of orders, but did have shared information. Things get around pretty well on the right side of the internet these days; could that be the only link individual dissidents need?

The reasons for operating independently are obvious. This sounds more difficult than having groups, but exponentially more difficult for the Deep State to deal with. The comparison that comes to mind is how Vox Day has been saying for years, probably more than a decade, to make your own platforms. It was so much easier for big name E-celebs to build a following on big name platforms like Twitter and You Tube. But they had their accounts vanish overnight, adding another notch to the saying “Vox was right again”.

Operating independently is however, my preference, and I could be wrong, or partially wrong. A really effective method might be both, not either-or. At any rate, here’s what Ive been doing thus far: I got an offer for some free  two sided business cards, save for the cost of shipping. I didn’t need them for my business, so I used them for this theme. Remember, everything I’m doing in this theme is carefully worded for those who are not at all familiar with how much they’re being lied to, so It’s necessarily simple.

I hand these cards out, leave or leave them where they can be found. Here’s a page with the graphics files you can use to print your own. Another page of activism ideas Here’s a picture of what they look like: 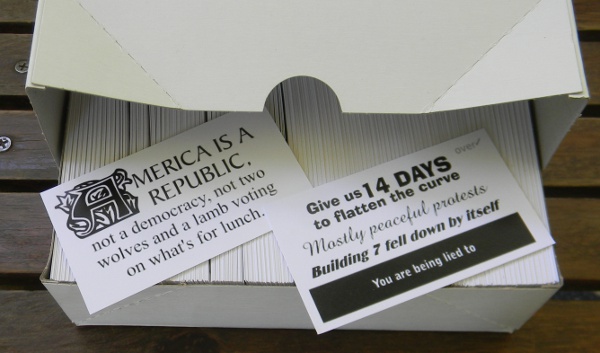 I also have the same message on the back of a full sized van (picture above), which I drive in very heavy traffic. That gets a lot of exposure. While checking on some cards I left at a location, I thought of another way to get the message out. A card can be read by someone holding it, the van can be read by those behind it; but how would I ever put all that info on a sign that people were driving past? Here’s what I did: I got the domain name liedto.net then mapped it to a page on this site, The neat thing is that domain names aren’t case sensitive, so here’s what the signs look like, above one from some years back.: 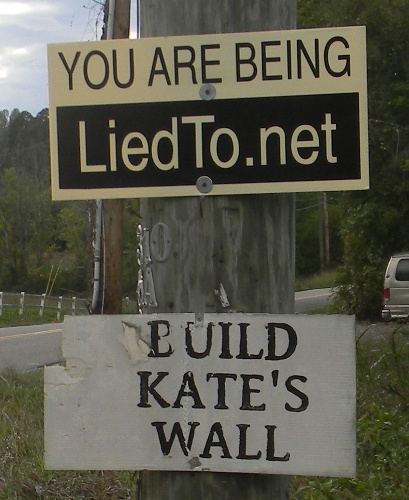 In summary, the internet is very good for getting information, passing it and encouragement to other patriots, but not as good for reaching normies. It’s easy to think that the country is divided between blue states and red states, between purple hairs and red pilled; but my experiences say otherwise. I’m running into people who simply don’t realize what’s going on. They’re open to what I’m saying. Maybe having a printed card lends an air of authenticity, I’m not sure, but it works. So think of your own ways of reaching people on the streets. If I can help you, I will.