I don’t know which is more embarrasing, having a collision that damages the front bumper, or leaving the truck on the yard without the brake on and having it roll into a pole. The latter is what did happen. The good part is that after taking the massive factory bumper off, I like the stubby look of the body much better without it.

I’m still working on the tusk push gaurds, but this needs to be in place for them to mount on. I made a larger one from some 3 sided channel steel, but it’s too big. It visually replaces what was there before, and I need something much more minimalistic. I was digging in the garden and hit what I thought was a rock. I moved the shovel tip to the side, and hit the object again, thinking that it was a brick. I moved the shovel to the side again, and hit the object once more. At that point, I worked at removing whatever it was. Turns out it was a very old car or truck axle from the late 1930s or early 1940s, I’m guessing. It has the perfect dimensions for this project.

Here’s what the truck bumper looked like from the factory:

Here’s the stubby look, without the front bumper. It also has a new paint scheme which makes the body look slimmer. 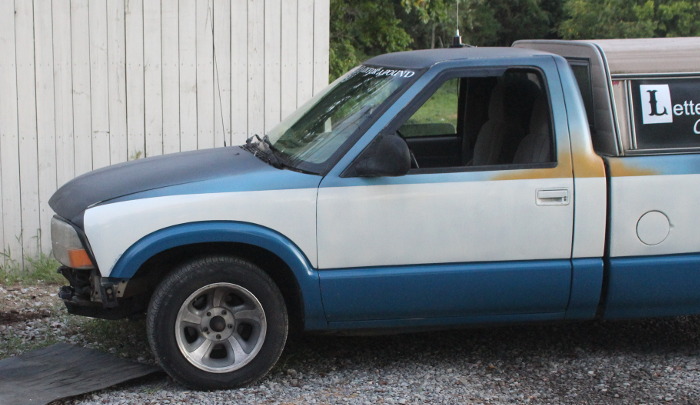 Here’s the first bumper I was making, with the newer one below it. The newer one is an angle iron piece and the axle. The picture below that is after I made holes to mount the axle  to the angle iron bracket. The bolts are 5/8ths thick with 1&1/4 inch long spacers.

Here’s a closer picture so that you can see how the axle is formed:

It’s far from finished, but I like the progress. I was having doubts about the the other bumper I was making, and that’s not a good point to keep going from.

Update: I worked on the tusk part this weekend. I had to fire up the coal forge and bend the back plates to match the curved pieces.