You are here: Home » Uncategorized » In Gun We Trust

In Gun We Trust

Years ago I thought about the phrase “In gun we trust” to describe trusting solely in widespread gun ownership as protection from government tyranny. I’ve been studying politics more, and now see another aspect of the phrase.

The first intent of the phrase was to address those who want freedom from overbearing government, but who disregard God by bringing the same entertainment in their homes as the ungodly, by sending their children to the same anti God schools, who live lives indistinguishable from their secular neighbors. The same two incomes, debt, houses, cars, everything save church attendance. In another post I made a case that Christ left the USA to its own devices in the early 1960s due to changes in government schools.

The second aspect of the phrase is about inactivity. I wonder if the right isn’t playing into the hands of darkness by waiting and waiting for a coming civil war and not putting serious thought toward other actions in the interim. I have no aversion to armed resistance, and I know a little about the hardware involved.

Another page of resistance ideas

With the raid of Mar A Lago, some wondered if there is truth in the Q idea. Maybe we’ll all know in two weeks’ time. It occurred to me that it’s all a movie, that Trump, Q, and the left are all on the same side, and that he will be reinstalled. Then, those on the right will have a sigh of relief, but the fed monster that Lincoln created will still be in place. The people will have jobs, domestic oil, and 2 dollar a gallon gas. But the department of education will still be in place, mandating the abominations of Darwin and LGBT. Those abominations are the millstone tied around America’s neck, which will be the end of us. Satan will have his way, the right will be divided and Christians will be a segregated minority.

OK, I have no way of proving whether the minority part is true, and frankly, I’m a bit over all the speculation, I’m over the political soap opera known as “Distraction of our lives”. This week’s installment is the migrants sent to Martha’s Vineyard. For me this idea that “the movie” is sinister is a working assumption. If that’s a wrong assumption, the goals I have won’t conflict with those of anyone who is doing what is right. Jesus said: Be not careful therefore for the morrow, for the morrow shall be careful about itself. Sufficient to the day is its own evil. Have you ever thought about that verse in terms of doing what you can today, while not knowing exactly what will happen six months from now or a year from now?

There are many memes and comments on the internet about the second amendment. Do you suppose the founding fathers never heard of the phrase “The pen is mightier than the sword”? Notice what’s in the amendment prior to the second. Yes, I’m aware of the extent of the corruption, and that we probably won’t vote our way out of this, but there is damage that can be done to the cabal other than shooting them. How do we really know how daunting the cabal is if we haven’t seriously investigated its strengths and weaknesses? How many have done an internet search for “non violent revolution”? How many have done a comparison of the Polish shipyard strikes  to the Canadian truckers’ incident? How many have a good grasp of the demographics of legacy news media viewers? 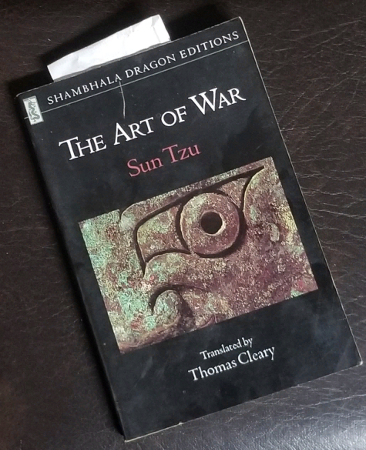 It’s obvious that the the powers that be want to destroy the U.S. It would be no surprise if they have plans in place for after that collapse. Things like a new currency, maybe completely digital. How many of us have contacted local banks or businesses about establishing a local currency under those circumstances? I haven’t yet. What if the credibility of the news media was completely destroyed? How would this affect the cabal’s operation in a hot conflict? They would be attempting to use propaganda to vilify resistance, to hide their own dark operations, to make the populace terrified or complacent. Acting now to destroy the credibility of the legacy news media will have a direct affect in a civil war. Acting today to destroy the credibility of the legacy news media is fighting in that conflict NOW.

Do you want to affect that conflict now, rather than waiting for it to arrive? Then start analyzing the strengths and weaknesses of the destroyers’ influence, how they manipulate people and retain allies. Of course, the activism that is appropriate for one is not for another. If you have young children, that’s a big consideration, if you don’t know who to trust with your thoughts, or how to safely relay them, think about that first. I’ve met intelligent people online, many are smarter than me. Imagine if the cognitive power of the right was utilized to analyze the weaknesses in the left’s institutions. I’m not sure that we’ve even gone half way there.

I have already been working against the credibility of the left, away from the internet and am working on efforts to counter the false science narrative. I was asked the other day what can be done in the face of such apparently daunting control. I realized that to say we need to analyze the strengths and weaknesses of the left is vague. We need to first recognize the the components of their operation, the determine the weaknesses of each component.

I made a primitive diagram, it’s a start. You can see it below. In it, you see the central power and the outlying components of the operation. Each component has two arrows, one is what the central power pays, the other is the expected return. The tasks and rewards are obvious to anyone who has been watching; things like wages, wealth and job security are received for enforcing the system. What’s not obvious are the details of the exchanges. Those are the targets. Below are a few ideas of how to weaken or destroy the exchanges, but more ideas are needed. 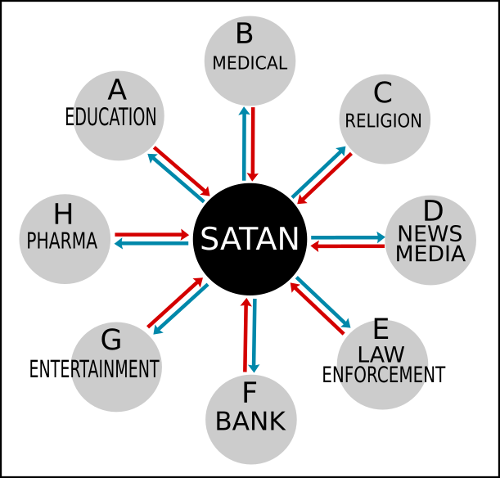 I am a Christian, God helps me with things I’m working on. I’m in the process of reading “The case for a creator” by Lee Strobel to my sons along with our bible study. In chapter 7 there is talk of the ability to discover (I will call this AD). That’s the observation that not only has the world been designed and created in a precise and amazing way; but that it was made in a way that man can learn about its secrets. I wondered what would happen if I prayed for AD in the projects I’m working on.

I got great results in two of my projects. Now I’m asking for His help in this one. So far it appears that there are strengths and weaknesses in the exchanges of the system that should have been obvious before, but I overlooked them. Where you see ADA below, those are instances which I think are an answer to prayer for AD. Some of these ideas are so sudden that they seem beyond what I’m capable of thinking.

As I said, I’ve been making signs for awhile, here’s a link. I’m in an interesting location as far as reaching people with the medium of signs. Below is a picture of a recent sign. The ADA realization that came after I made it; is this: Big Pharma is a huge problem in this country, with their deadly agenda and ability to buy politicians. But where are most of their sales? Isn’t it through prescriptions written by doctors? How much is over the counter sales? If the public loses trust in doctors, this could weaken Big Pharma.

More ADA: One of the most important parts of marketing is to know where your customers are coming from; which advertisements they’re responding to. A keen employer will have his employees always politely ask people “So how did you hear about us?”

Suppose that you wanted to target the finances of a lying media outlet. So you see who their biggest advertisers are. If you were to boycott them, it would create hostility toward your cause. What if instead, you helped the advertiser to know where their customers were really coming from? There are a lot of wasted advertising dollars spent. Then, you would be a friend who is helping. If it turns out that the media outlet is working for them, you won’t have made an enemy, and they might be open to other marketing suggestions. 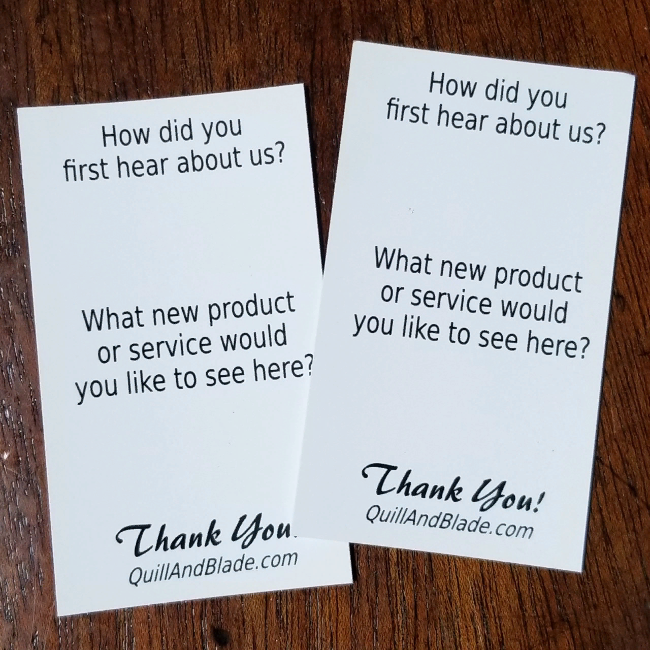 These are just a few ideas. Imagine if the smart people in the Dissident Right prayed for the ability to discover ways of engaging and damaging the institutions of the evil agenda? If we truly knew the workings of the enemy, and knew ourselves?

Below are pictures of signs I’ve made and cards I distribute. Cards are easier and less expensive than stickers. ADA With a simple roll of clear tape, you can put them a lot of places. 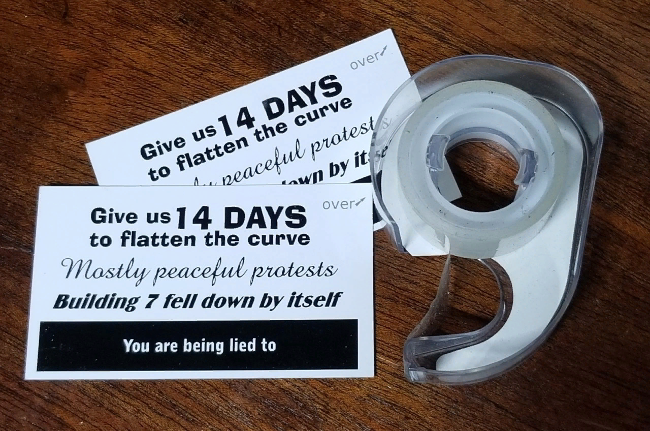 I read an analysis of sucessful and failed non violent revolutions; one feature of the sucessful ones was to diminish the loyalty of troops and police to the government.

Here’s the back of a van with a message about the lying news media:

#whattodo What to do. Activism. Practical resistance. Fight the deep state. #activism