You’ve no doubt seen the twin vertical push guards on the front bumper of police cars, or a similar arrangement of a deer guard on a truck. So what if instead of boring old steel parts painted black, you had giant wild boar tusks there instead. I think it’s one of the coolest ideas I’ve had.

I’ve been working on it awhile, a few hours each weekend. Below are some pictures of the progress. I decided that I should also make the 6 incisor teeth between the tusks. Initially that seemed like a difficult task, but it has been a lot easier than I thought.

The tusks each consist of two pieces of 1/4 inch plate steel. Both pieces are long tall triangles. The ‘back’ one is heated in a forge and shaped to fit the curve of the tusk, then welded to the flat center piece. If this sounds confusing, the picture below should show what I mean. the silver part is an old car axle from probably the 1940s I found burried in the garden. It will be the wide part of the bumper. Looks like car bones, eh? Perfect for this project. 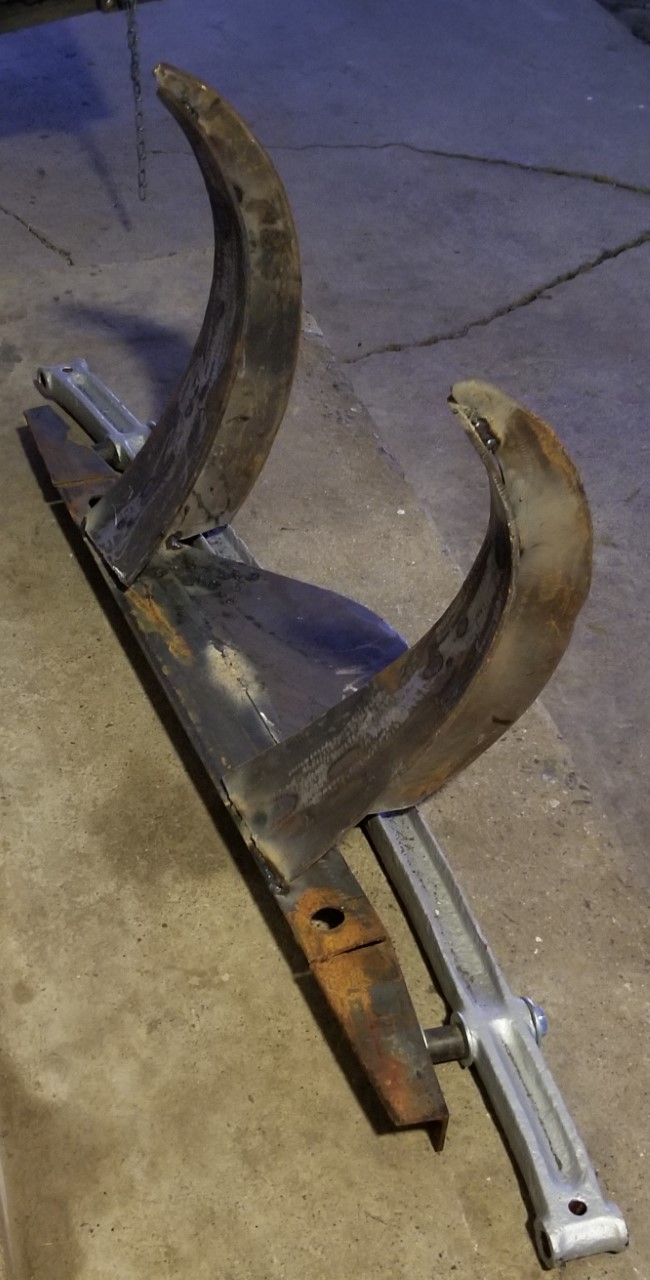 The teeth are made from 6 pieces of steel pipe. The two center teeth are 3 inch diameter pipe, 9 inches long. The next teeth going outward are 2.5 inch diameter, 8 inches long. The outside two teeth are 2 inches diameter, 7 inches long. The teeth are round at the base, but taper to a flat edge at the top. In the diagram below, A is the bottom of the pipe cut at 45 degrees. B is the top cut at 90 degrees. C is a wedge shaped cut along the side so that the two halves can be pushed together. This cut needs to be wider than you think, so that the sides also taper, as seen by the red lines at the right. D is a dual notch cut which makes putting the two halves together a lot easier. The top edges will need to be flattened with a hammer and welded as shown by the blue line to the right. Thicker pipe will require heating in this area. 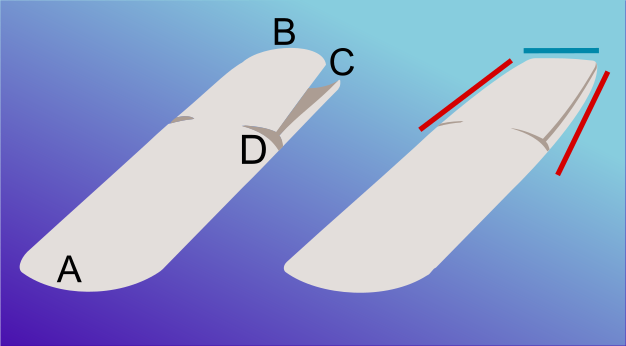 So the teeth decrease in size, and since they also decrease in length, the cutting line of the incisors is tilted. I’m trying for excellence of design and execution, so there’s a final consideration: I didn’t want the teeth to be staggered, but on one line. I first thought I might have to tack weld the teeth in position on the 1/4 inch jaw plate that the tusks are mounted to, in order to mark where to cut the top edge of each tooth. I didn’t want to weld them in place until all the fiberglass and bondo shaping was done, since they are so close togetether that work would be difficult. I’ll weld them inplace afterwards, using a squirt bottle with ice water in it to protect the top part of each tooth from migrating weld heat. The orange diagram below shows the difference between staggered teeth and those on a line. I didn’t need to tack weld them in place, I just held three at a time by pushing down on the base of them, then marked the line on each one with soap stone. 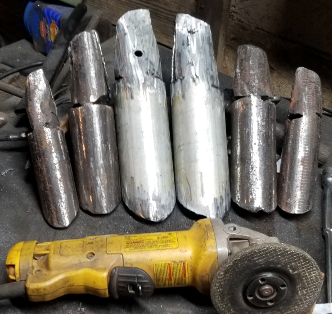 The teeth have had their fist layer of fiberglass in this picture, it’s to cover the gap created by my poor torch work. It was like some of these old pieces of pipe had a layer of mud inside them. When I went to cut with the torch, sometimes the metal would just turn into a puddle of liquid, then blow out a hole that was too big. Fiberglass will fix it. 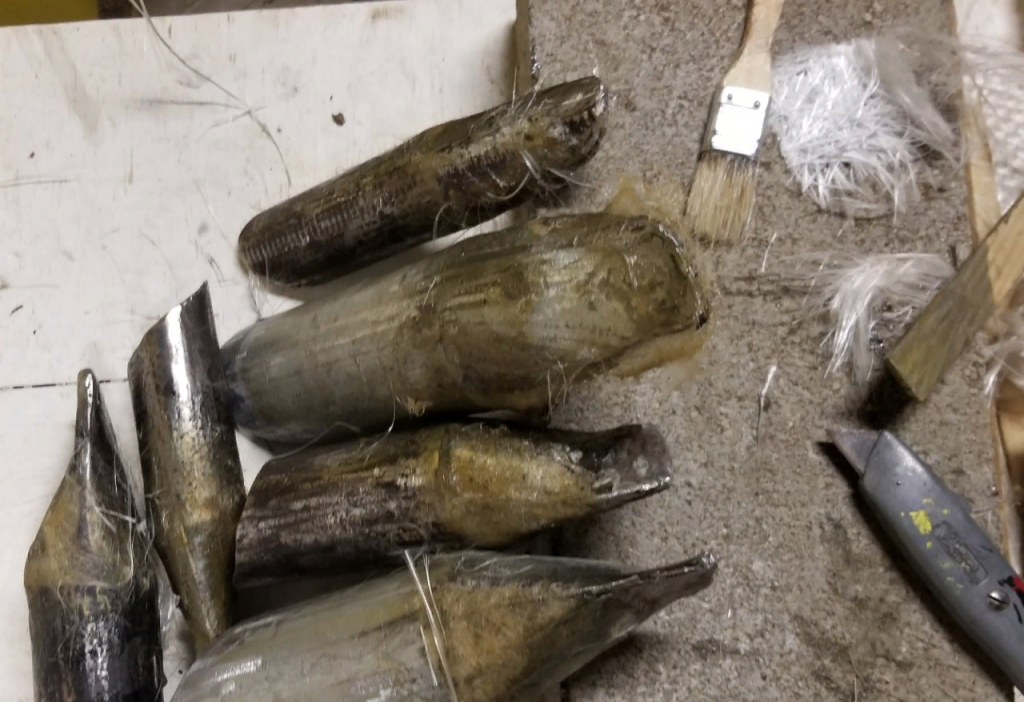 In the next picture I have taken a thin cutting wheel on a four inch angle grinder and made notches along the edges of the tusks. This is for the thin wire, which is shown in the second picture. The third picture shows where I started putting fibersglass on the wire. It will work better when I use gravity for me, not against me. This is the progress from the weekend of October 16th, 2022. 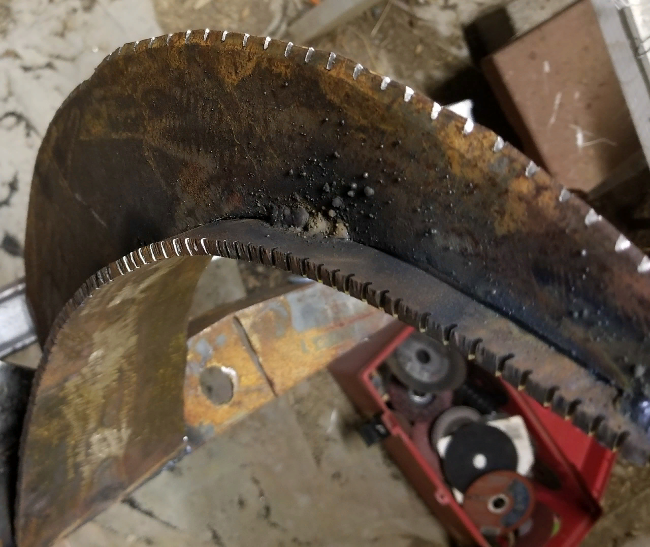 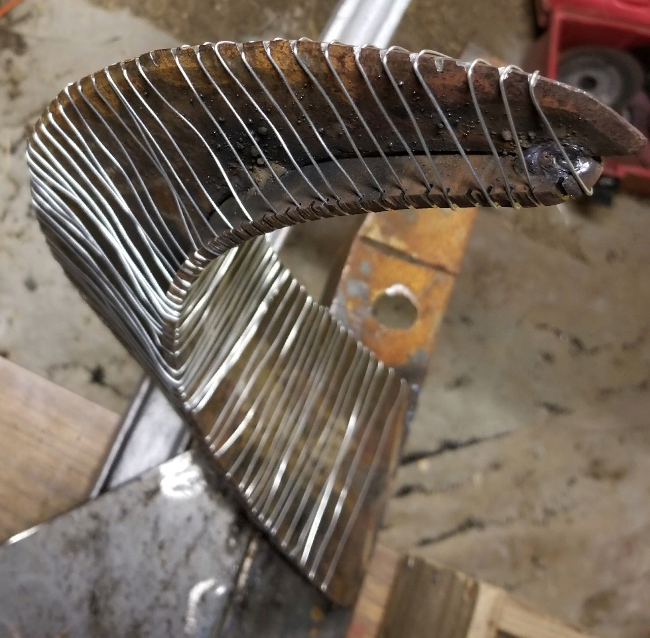