I’ve been intently studying how paints were made in the 19th century for the last several months. Coincidentally, for years I’ve heard that gasoline can from a varnish on the inside of fuel related parts; but I’ve never seen much of it. A brownish stain here or there, but no real accumulation.  I think God let me find a spoonful at this time, when I have all these paint making ingredients on hand.

My daughter bought a 1965 Ford Thunderbird with a 4 barrel carburetor. When she pulled the top off the carb, there was a layer of sticky varnish about 1/8th an inch thick. I used a flat screwdriver to put about a teaspoon into a paper Dixie cup. I knew it needed a dyer to make it become hard and not liquid. My first choice was Japan Dryer, which didn’t work. It needed a ‘hotter’ (more volatile) solvent; Japan Dryer is 3% Cobalt salts, and 97% Naptha. It separated into a thin brown liquid on top, and a leathery layer across the bottom. I quickly added lacquer thinner, which made it all liquid again. Then I tried Zinc oxide as a dryer. It appears to have worked; but I have littel experience with the Zinc Oxide to know if that’s what made it dry. The thing about the Zinc Oxide is that it’s rather white, and changes the color of what it’s added to.

I added black pigment to paint the letters , and then some Yellow Ochre to make a greenish color for the dinosaur. the black pigment was so strong that it mostly covered the Zinc Oxide, leaving an off-black color. 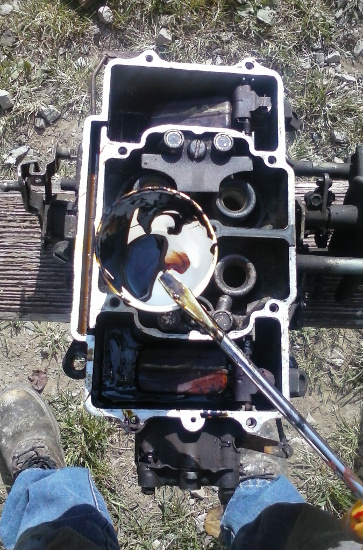 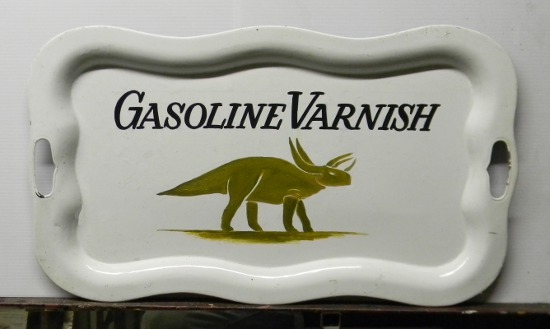