You are here: Home » Uncategorized » Family Adapting to Circumstances.

My wife passed away about two years ago. I have two sons who are still school age. One of my daughters, who is 20, has stepped in to take care of them, but it means spending a lot of time at home. One of the things she does for money is to buy old horse trailers, paint them, and resell them. It works well. Most of the work for a paint job is in the preparation steps, which she does. Then I do the actual painting.

It’s a learning process; here are a few tips on what we do: Paint them grey, since it’s a nuetral color, and is more compatible with the color of the buyer’s vehicle. For instance, even though I have a couple gallons of a nice green color, it won’t go well with someone who owns a red truck. In this latest case, she bought white for the roof, and grey. I painted the roof white first, (it will be cooler in summer), then the grey at the bottom. Next I took the remainder of both, and mixed them to make the light grey in the middle. That way, it will be an exact tint of the grey below, which in this case is a nice warm charcoal type of grey..

In the second picture you can see a dashed red line I made with a sharpie pen prior to painting the darker grey. It’s an old trick, just about gauranteed tio work. Red bleeds through really bad, so I use that to my advantage. This way I can spray the lower grey just above the line so that I know it’s completely covering the lower area. Also, I don’t have to draw the line twice, or spend the time taping it off twice. The second application of tape would be slow, since I would have to align it perfectly with the previous application. This works really well, and the red doesn’t have enough penetration to come through the light grey. 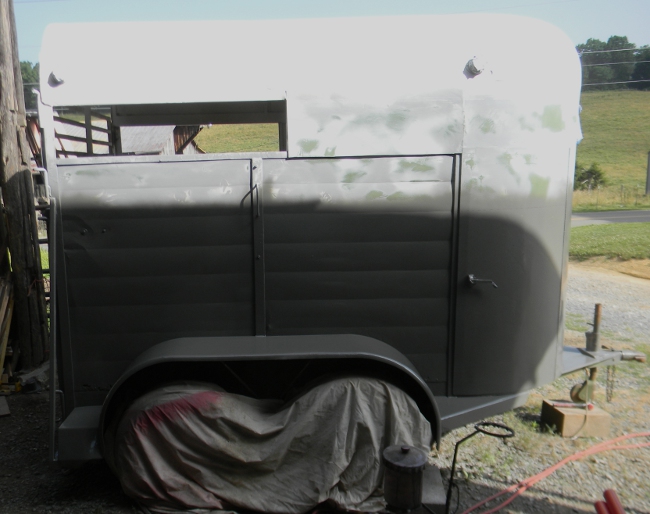 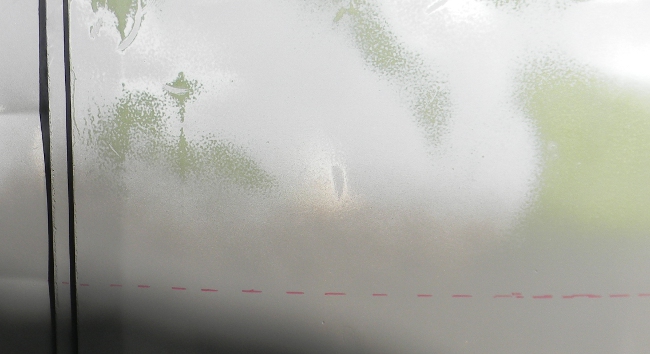 White, black, grey, and silver are nuetral “colors”. (In art class I was told that they really aren’t colors, and I concur, but for the sake of conversation, I refer to them as such) Clean the tires really weel before painting the wheels. That way, you won’t mar the fresh paint with chemicals like degreaser. I use a somewhat thing piece of aluminum as a paint guard. It’s about 4 inches wide by 24 inches long. It’s bent in a curve. I place it carefully around the little bit of steel that is the outside edge of the wheel, and hold it there with one hand while using a can of spray paint in the other. The guard isn’t long enough to go all the way around the wheel, so I’m very careful to not paint to the ends of the guard. If I did, paint would spary past the guard and get on the tire. A really bad, cheesy look. This is the absolute fastest and easiest way I’ve ever used to paint wheels. Not only is the silver nuetral, but it has awesome coverage. Another thing, I was careful about proportions. The narrowest area is the white on the roof, the light grey is a little wider, and the dark grey is the widest area. that way none are competing with another for design/visual priority. 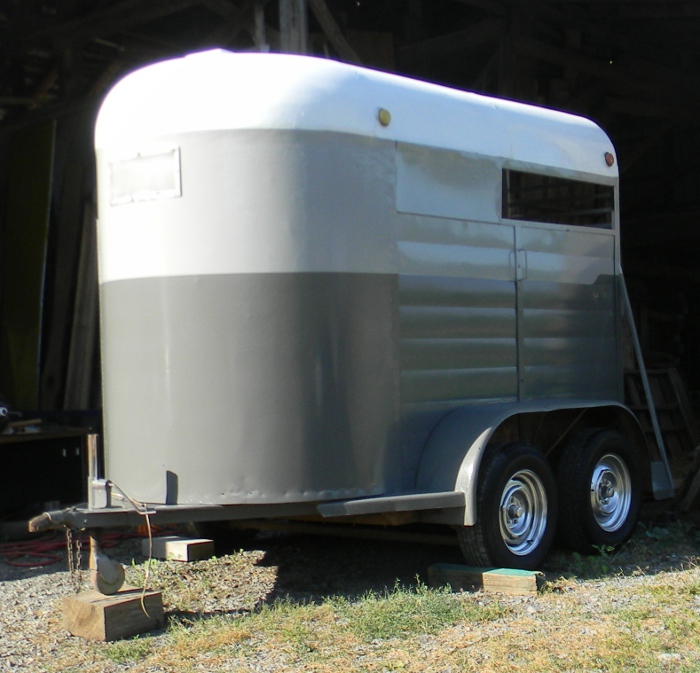